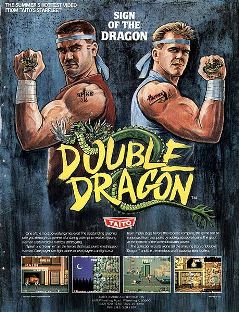 Jimmy and Billy Lee are in a bit of a quandary. Both are kick-ass martial artist street toughs with the hair and tats to match, but they seem to be vying for the affection of the same lady, a pretty young thing named Marian. While this love triangle may end badly for the trio in the long run, the ones who should be immediately concerned are the members of the Black Warrior Gang, the outfit who made the utterly brain-dead decision to kidnap the young bird from the two most dangerous dudes in the world. Needless to say, this all ends badly for the Black Warriors, who are punched, kneed and hair-tossed into submission through four stages of pure, unadulterated ass-kicking.

This decidedly epic situation is the premise of none other than Double Dragon, one of the most iconic arcade games ever created. Developed by Technos and released in 1986, Double Dragon brought fans many revolutionary features they had never seen before, including two player co-op, and the ability to add injury to insult by taking your enemies weapons from them in order to exact vigilante justice on their melons.

But with a relatively steep difficulty level, these features will not be put to good use unless you know how play. After learning the basic moves (which include punching, jumping, kicking, tossing and elbow striking), learning the lay of the land and route to your primary goal comes next. These areas of attrition consist of a city slum, a factory, the woods, and finally, the gang’s hideout. As you traverse these increasingly difficult maps, six distinct enemy characters will appear throughout the game to stymie your progress, each with differing physical appearance and fighting style.

To reach the apple of your eye, you must take down Williams (your common street punk) Roper (a stronger version of Williams who enjoys tossing oil drums and such) Linda (lady punk who you almost feel bad about beating up, until you realize she has no problem cracking that whip of hers) Bolo (a jacked up bald guy who, instead of tossing inanimate objects, prefers to toss...you) Abobo (the first boss who looks like Bolo with a Mr. T mohawk) Jeff (second boss who looks exactly like you! Think of it as a battle against yourself) and Willy (The final boss, heavily armed with a fully-automatic machine gun...not a fair fight.)

While the single player game ends after defeating the final boss, Double Dragon proves its genius by creating one more major roadblock before if you completed the game in triumph. If you undertook this beat-em-up the way it was supposed to be played, with a friend, you are forced to duke it out one-on-one, to prove who deserves to be with the beautiful Marian.This was the icing on the cake of DD's revolutionary use of cooperative gameplay. Being one of the earliest game to adopt this style, Double Dragon can be looked at as a trailblazer in the multiplayer experience.

It is funny to think back and realize that this game was cutting-edge at the time, bringing with it performance benchmarks that were hard to meet. Although the original arcade version featured a color palette of 384 colors, the hardware used was actually a collection of several 8-bit processors running in parallel, due in part to the cost-prohibitive 16-bit technology at the time. Additionally, the hardware consisted of multiple HD6309-based processor chips, and several processors dedicated to audio, including the Yamaha YM2151 sound chip, making Double Dragon a technological beast compared to its competition.

If you have the feeling in the back of your mind that this game was created using a great deal of influences, you would be correct. But there was one overarching influence in particular that had that provided the game's director with his greatest inspiration when creating his opus.The Yoshihisa Kishimoto reportedly conceived his plan for Double Dragon on July 20th of 1986, which was the 13th anniversary of Bruce Lee's death.

In fact, the fictional martial arts practiced by the duo in the game is called Sousetsuken or 'Twin Interception Fist', which is described as a combination of Kung Fu, Karate and Tai Chi (sounds legit). The name is derived from Bruce Lee's own martial arts style Jeet Kune Do. Even the Lee brother’s themselves, along with William and Rowper, were named after the three main heroes from the 1973 classic, 'Enter the Dragon'.

While the title was a masterpiece of the time, video games always contain bugs, and DD was no exception. The most famous of these bugs has to do with the way enemies attack the player. Sportingly, enemies will not attack when the player’s back is turned, but will instead walk up to them and try to move past so they can get at the player from the front. Thus, by standing with your back to a bad guy, it was possible to simply lie in wait and take them down when they get close, without the need to worry about being attacked (And that, kids, is how the idea for Michael Jackson's "Moonwalker" Arcade game was born...)

Being an arcade mainstay, points were always an important part of the Double Dragon experience. While everyone is under the impression that the world record is held by the aptly named Jimmy from the infallible video game movie, The Wizard, the true master of Double Dragon is Jason Wilson, who currently holds the official points record for this game with a 171,210 total he put up on July 24, 1999.

The quest for more points was just one of the factors that made the game was such a huge hit in the arcades of America and Japan, and when the home versions finally came out, the rear side of the package advertised, 'You'll never have to stand in line to play Double Dragon again!' Advertising the fact that the game was so popular that it became "inconvenient" was a strange but true testament to the game’s glorious run in the late eighties.

All in all, Double Dragon would eventually become the prime inspiration for an entirely new genre, with classics such as Final Fight and Streets of Fury owing a huge debt of gratitude to the Technos legend.