How Does Game-Playing Affect Your Mind & Body?

Ever wondered how your brain really reacts when playing games?

International Fun At Work Day does exactly what it says on the tin. It encourages workplaces to do something different, building team relationships and reducing stress levels.

We think games tables are ideal for office downtime. As we showed in our recent infographic, 12 Reasons Why You Should Let Your Employees Play Games, they bring a multitude of benefits to a workforce. Physical and psychological health can be vastly improved with regular games breaks. But how does game-playing actually affect the brain?

We decided to test a variety of games tables, using various biometric devices to monitor the effects. We tried five of our most popular games room products, presenting the results as graphics. 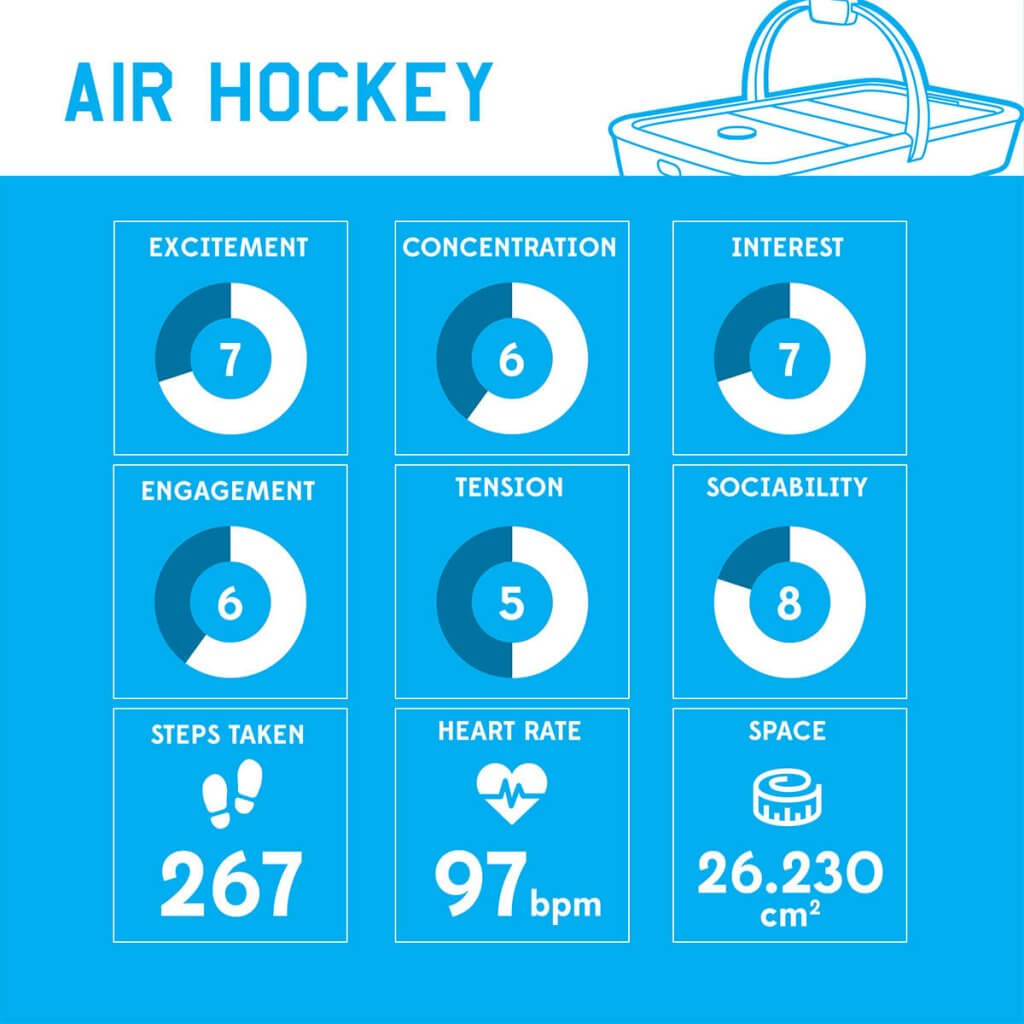 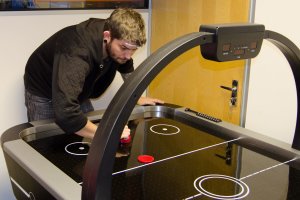 This intense game requires lightning-fast reflexes and rapid mental processing power. Here the test subject is excited and interested, with interest tending to dip as excitement builds. This suggests that the anticipation of an exciting volley is more interesting than the volley itself, when interest subsides and concentration rises.

Air Hockey is a relatively high-intensity physical workout, with a high excitement level. This excitement promotes adrenalin production, accelerating reflex actions and reaction times. Games tend to be short and intense, with rallies lasting less than a minute. Ideal for 10-minute coffee break games, and for team games of up to four players, depending on the size of your table. 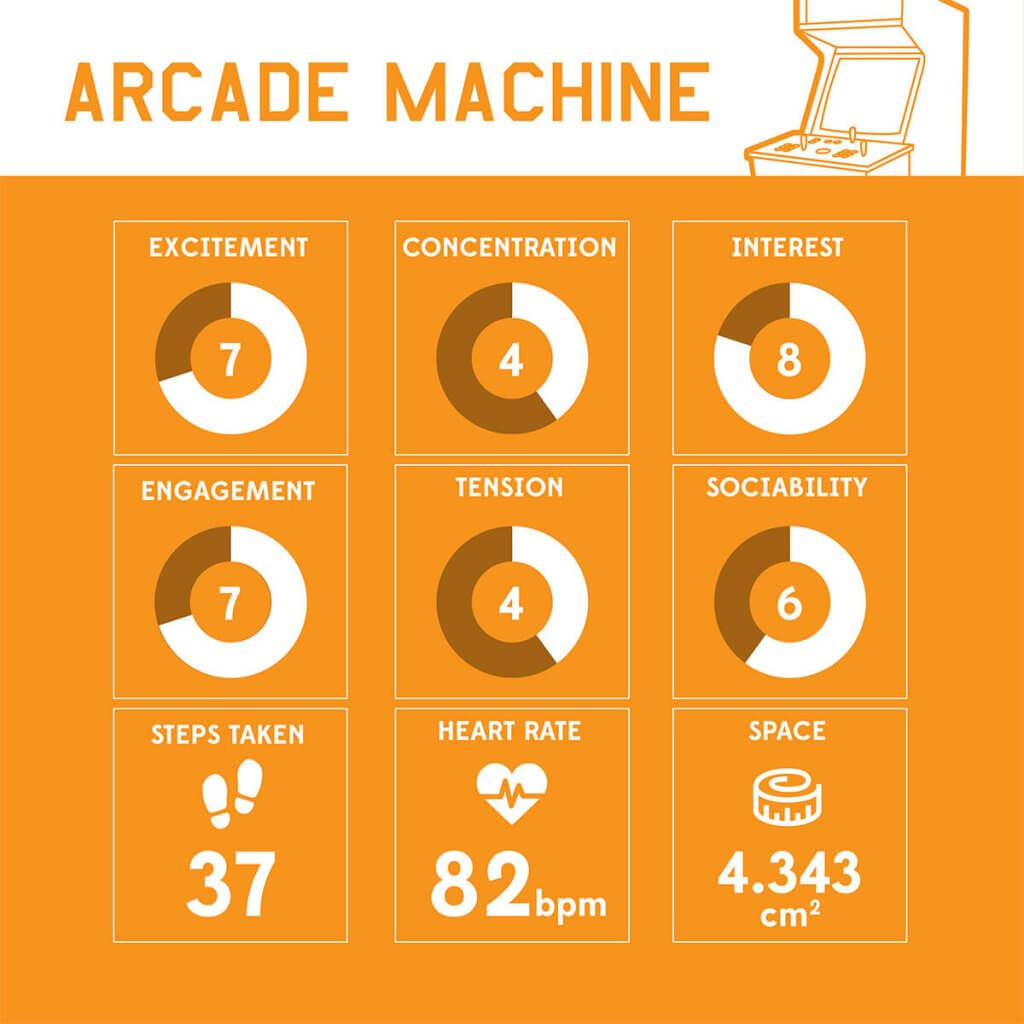 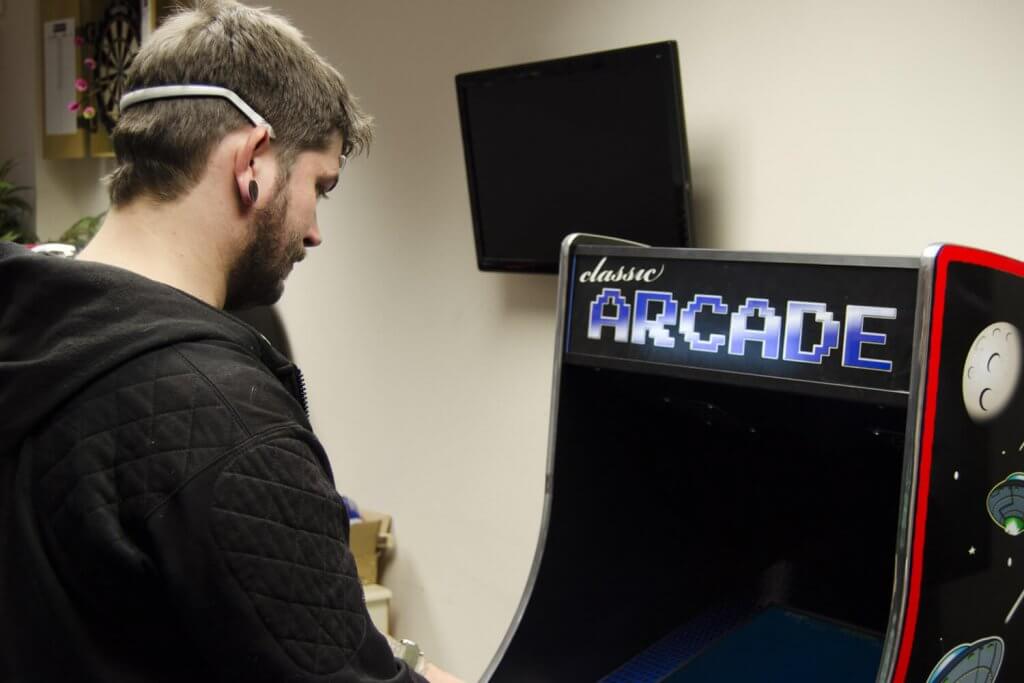 Physically undemanding and yet mentally taxing, videogames have created generations of dedicated gamers over the last 40-odd years. Depending on the game you play, these machines build hand-eye coordination, reflex speeds and more. Here, the test subject’s Interest is wildly erratic, peaking when, in the classic arcade game 1942, targets are massing on screen. As the threat increases, it isn’t surprising to see Tension following roughly the same peaks and troughs. As the threat is neutralised or disappears from screen, Interest drops off and Engagement rises, as the player anticipates the next wave of targets.

Arcade machines like this are excellent for those in high stress work environments, as they provide an immediate and immersive respite from ‘real life’. Perfect for a quick five-minute shoot-em-up or for a longer-term adventure, they encourage employees to stand up out of their seats. Most, like this Cosmic 2000, have two sets of controls built in – so you can take on the office’s Mortal Kombat champion. 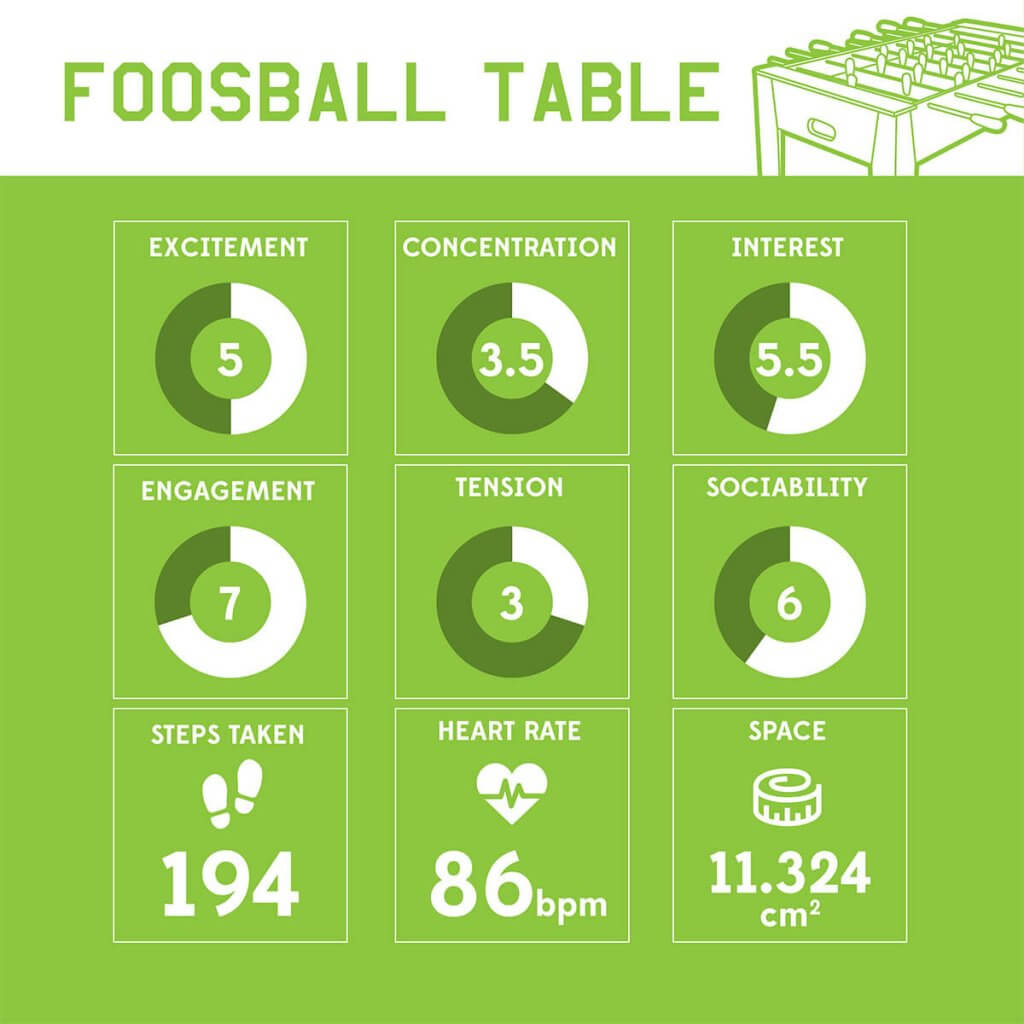 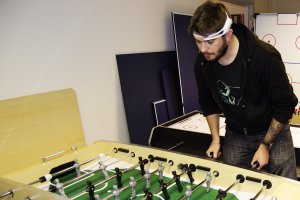 Our test subject, after an early peak, seemed to lose interest in the game quite quickly. Interest and tension spiked hard at the time of an attempted goal by the opponent, during which time the test subject had to mount a robust and difficult defence, but didn’t recover after that – perhaps due to a clear advantage gained early on. Engagement remained moderately high throughout.

Foosball tables are great for offices and homes which are short on space. Taking up around half the space of a pool table, with less room needed for manouevre around the edges, a tournament-spec table can still be used by up to four players for team games. Physical exertion is limited mainly to the arms, but reaction speeds and particularly hand-eye coordination are tested to the limit. With plenty of skills to learn and master, a foosball table makes a great addition to any office. 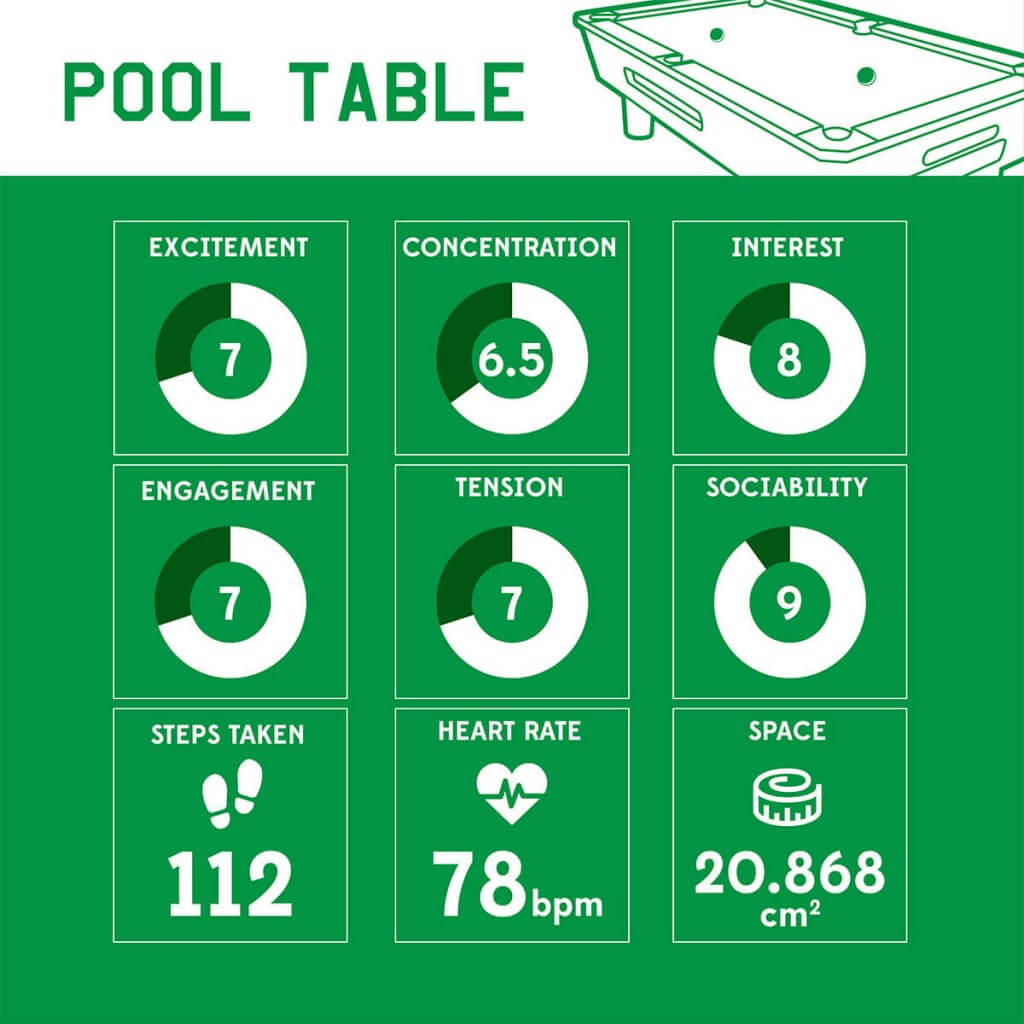 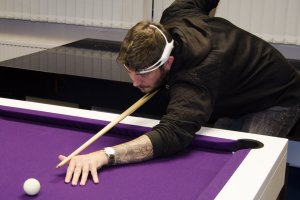 Surprisingly, our test subject endured the highest levels of sustained Tension and Interest during this short game of pool. Whilst physical exertion was relatively low, with a low heart rate and few steps taken, the stress of calculating shots, watching one’s opponent potting balls and the suspense of turn-based gameplay create very high Interest and Tension. Each shot by the subject was preceded by a spike in Engagement, as the player carefully lined up the shot.

A pool table is a fantastic installation in an office where longer breaks are encouraged. A game can take 20 minutes or more to complete, and time is needed to consider shots carefully. But as the evidence shows, it requires extremely high levels of concentration and nerves of steel – all precursors to a goal-related release of dopamine in the brain, which occurs most obviously at the end of the game – particularly for the winner! 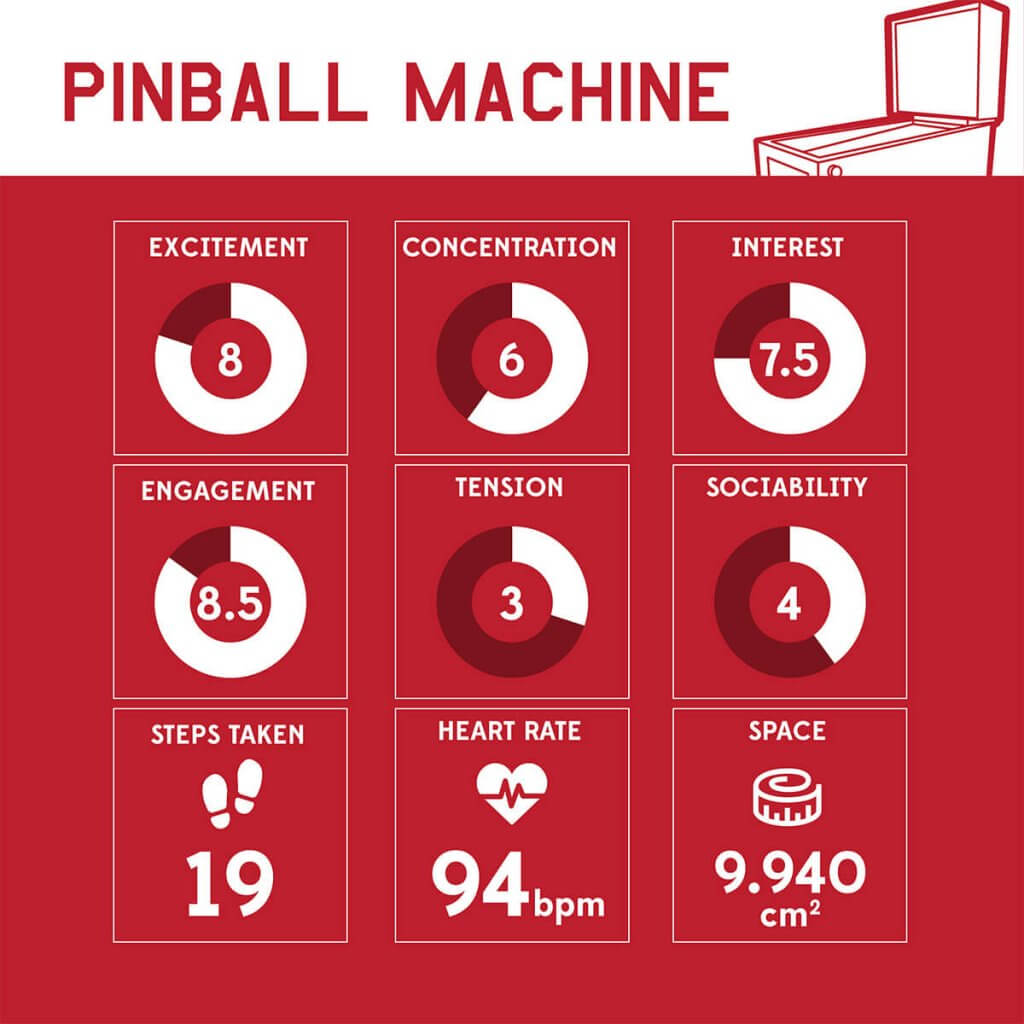 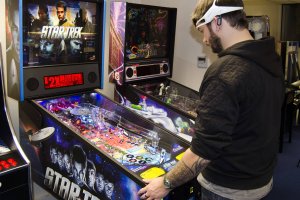 For anybody who has played a game on a full-size, commercial-quality pinball machine, our findings won’t come as a surprise. Interest, Engagement and Excitement move erratically depending on where the ball is on the playfield, climbing sharply as it approaches the flippers. Pinball is an incredibly fast game, with the best players able to combine fast reaction speeds with clinical precision, aiming for the choicest targets on the table. The rapid, erratic brain activity detected here demonstrates this well.

Real commercial-grade pinball machines are works of art in their own right. Beautifully engineered and well-equipped, they make a great centrepiece to any games room. With complex rulesheets, feature-packed playfields and spectacular light and sound shows, pinball machines are an acquired taste for the home or office gamer – but if you’ve acquired the taste already, you’ll know that absolutely nothing else will do. As only one person can play at a time, they aren’t team games, but nothing draws a crowd of spectators like a true pinball wizard.

How We Did It: Video 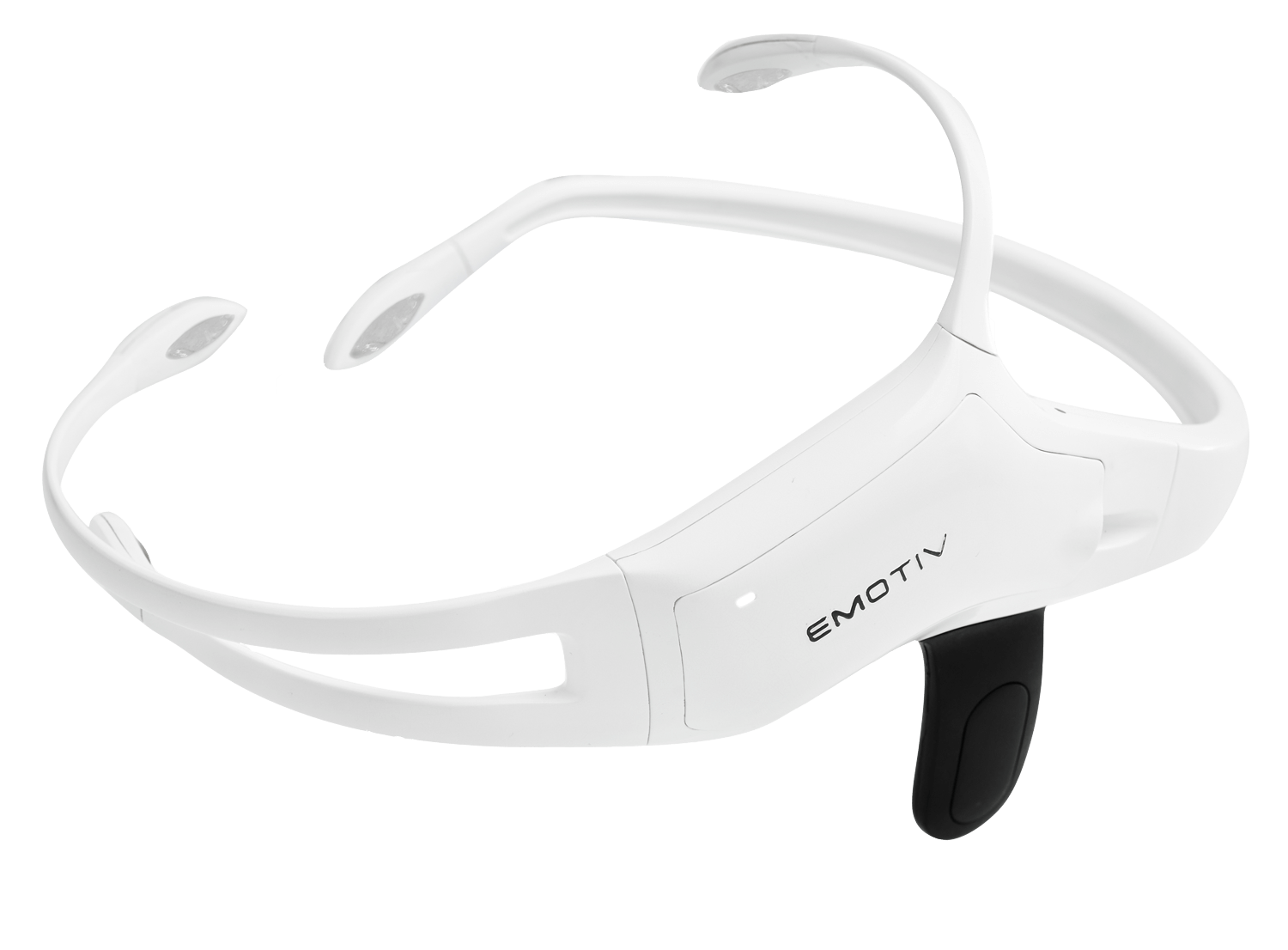 Wearing an Emotiv Insight brain monitor and a wearable fitness device, our test mule played each game for five minutes.

Excitement, Concentration, Interest, Engagement and Tension are measured with our Emotiv mind-reading device, which has a number of EEG sensors that fit directly to the head. This headset monitors key areas for brainwave activity, and transmits this into a scrolling computer display for real-time monitoring and recording.

The Excitement metric represents the emotional arousal of the test subject. More intense, faster games are likely to have higher Excitement readings, but it can also peak in games that are low in speed, but high in suspense.

This metric detects the extent to which the test subject is able to focus on the task in hand, ignoring distracting stimuli from other sources.

Tension, or Stress, is described as the level to which the test subject is comfortable with the situation in hand. As things start to feel out of control or are moving too fast, the Tension metric may display a rise. A more tense game will probably lead to higher excitement and concentration readings.

Quite simply, Interest is the measurement of how much the subject likes or dislikes something. As games change, or the subject becomes bored or finds the game limiting, Interest may drop off. Equally, as a game intensifies (for example, if a multiball mode is activated in pinball), Interest may rise sharply.

This measures the test subject’s Engagement with the task in hand. An Engaged subject will probably be subconsciously excluding other stimuli and be highly immersed in the game.

A rating based on the social atmosphere the game creates, in terms of attracting spectators and atmosphere. The more convivial the game, the higher the rating.

This is the total number of steps taken during a five-minute game, measured with a personal fitness device. It registers each footfall detected during the game.

This is the average heart rate across measurements taken from a five-minute game, measured with a typical wearable fitness device.

This is the footprint of a typical games table of this type, represented as CM squared. The exact dimensions of games tables vary widely, and you should measure carefully before installation. 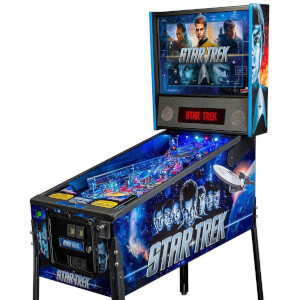