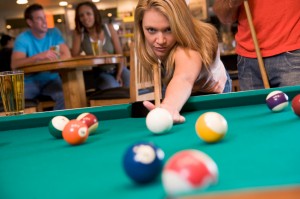 You’ll find a pool table in many pubs, allowing you to combine playing pool, with drinking and having a lot of fun.

As might be expected, a number of drinking games have emerged over the years, which all make the most of the presence of a pool table. Typically, as the players drink more and more, the standard of play tends to suffer. This often leads to more drinking, ensuring that the deterioration in playing standards continues, as does the increase in amusement levels.

Here are 5 great drinking game variations that can add a lot of entertainment to the game:

Being able to break is often seen as being a considerable advantage, particularly since the best players will usually be able to pot at least one ball from this opening shot.

In order to add an element of competition to the proceedings, you can introduce a new rule. Select a player from each team and ensure that the two individuals each have a full glass. The first one to drink the contents of their glass gets to break.

The danger of missing a shot

Missing a shot can be disappointing, but it’s nice to add an extra element, causing the entire team to suffer! When a player misses a shot, all team mates could be forced to take a drink.

As an alternative to this rule, you may prefer to insist that all opponents take a drink, when someone on your own team misses a shot.

An excellent variation relates to playing a foul shot. In this case, the player who has committed the foul might be expected to finish their drink in one gulp. That’s a rule that really makes players think carefully about their approach to the game.

The best players will often be able to pot multiple balls during the course of a single visit to the table.

A new rule can be introduced, stipulating that your opponents must take as many sips as the number of balls that you pot on each visit. As an example, if you manage to pot 3 balls, then the expectation would be that you opponents would then be forced to take 3 sips from their drinks.

The loser buys the next round

In order to make losing the game a particularly costly experience, the loser might be forced to buy the next round of drinks.

If you are going to enforce this rule, then you may want to think about introducing some sort of limit. If one individual keeps losing, then it could turn into an extremely expensive evening out!

Each of the 5 variations listed above can really add to the fun that’s associated with a game of pool. Depending upon your preferred approach, you might even seek to implement a number of these variations within a single game.

For the more adventurous, there’s also the opportunity to combine all 5 variations and to ensure that every shot really means something.

You’ll probably find that introducing the drinking element tends to increase the competitiveness of games, although some people will often be happy to play poor shots, knowing that this means that they will then get to have a drink!

When defining the rules at the outset of a game, you may also want to think about whether players are allowed to take sips from their drinks on other occasions, beyond those outlined within the rules. You might even enforce additional rules, associated with having to refill drinks at the bar.

Pool is a game that lends itself to the easy addition of such rules. As a game that requires a lot of skill, but has a simple set of basic rules, it produces drinking game variations that everyone can understand. 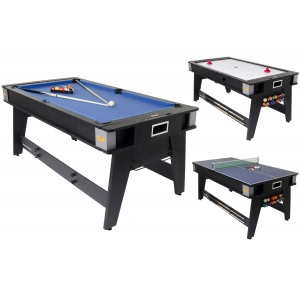 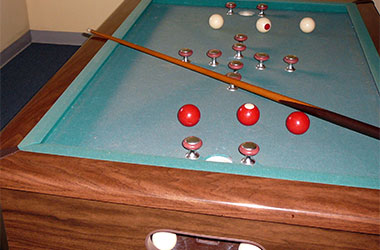 Other Games to Play on a Pool Table