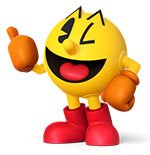 Ask anyone to think of one arcade character and who would they pick? Yep it has to be Pac-Man

The little yellow puck-muncher has been around for over 35 years and it still going strong (despite some questionable late 80s spin-off cash-ins). He even has some modern arcade machines under his belt - although if you are after an original cabinet we can also help with that.

Still for the majority of our customers we would recommend one of our multi-game retro arcade machines, which come with Pac-Man as well as a whole bunch of other retro 80s and 90s arcade games. 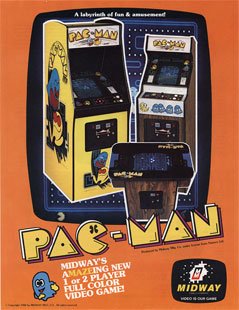 The yellow biscuit of goodness that has given millions of people countless hours of entertainment needs no introduction. He is Pac-Man, one of the most iconic figures in not only gaming, but in global culture as well, extending far beyond the sticky arcade floors of America.

Released in October of 1980, Pac-Man immediately did two things: It created a new genre to pull the masses away from the flood of 'shooters' on the market, and accomplished the seemingly impossible task of appealing to both genders. While games have been, and still are, a male-heavy space, Pac-Man helped introduce the joy of gaming to the fairer sex, effectively doubling its user base, and in doing so, allowing the title to collect more than $2.5 Billion in Quarters by the early 90's.

But dominating the arcades was not enough, Pac-Man also went on to play a major part in 80's pop culture, becoming the most well-known game character ever in terms of brand awareness, along with becoming a mainstay in the Smithsonian Institute and the New York Museum of Modern Art.

While the influence of Pac-Man is beyond reproach, it does make one question why the game was able to establish such a strong foothold in the minds of users. It may be the inherent simplicity, with players controlling the geometric hero through a maze, while eating pac-dots and avoiding four tenacious ghosts who want him deleted from existence. Blinky, Pinky, Inky and Clyde will stop at nothing to keep you from collecting the dots, but if you eat one of the "power pellets" spread throughout the map, the tides will turn and these once-frightening ghost’s will become scaredy-cats, turning a tasty shade of blue, allowing you to switch roles and hunt your spectral enemies.

One of the legendary features of this equally legendary game is the perfect play. A perfect game of Pac-Man will occur when the brave soul reaches the maximum score on the first 255 levels without losing a life. This can only be achieved by eating every single dot, power pellet, fruit, and enemy, while pulling out all the stops in the last level by collecting as many points as possible. The first human to accomplish this feat was the notorious Billy Mitchell (see Donkey Kong), who finished the play through in just six hours. It is a testament to the long-term sustainability of the game that such a score is still so highly prized, even decades after release. Currently, it is the venerable David Race of Beavercreek, Ohio who now owns the speed record after blasting through a perfect game in 3 hours, 41 minutes and 22 seconds.

Every great game has a great backstory, and Pac-Man is no exception. Developed primarily by one Namco programmer named Toru Iwatani, the game was based, aptly, on the concept of eating, and was named after Japanese slang paku-paku, which was meant to convey the “sound” of a mouth opening widely and then closing. While most equate Pac-Man with that of a slice of pizza, which Iwata went along with at first, the true reason behind the design was simply a rounding out of the Japanese character for mouth, which is kuchi.

Having the distinction of being "The most successful coin-operated game of all time" and having universal name recognition will ensure that the Pac-Man legend will live on for years to come. In a hundred years, when everyone is playing their games in fully-realised, virtual reality simulators, the little arcade game that could, Pac-Man, will be remembered as an absolutely essential link in the evolution of interactive entertainment.