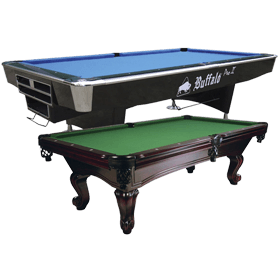 Great special offers
On our most popular tables

The world's most unique tables, ready to transform your games room.

Designed to be tough and durable, they're the first choice for venue operators with space for a pool table.

Choose an MDF American table; lightweight & great value. For players of American pool who don't have much space.

Designed for home use, these tables feature American-spec cloth & pockets for an authentic feel.

Why Buy From Liberty Games?

It could be argued that the most beautifully designed pool tables have come from the USA. American pool tables show off some of the best styles at the traditional end of the spectrum right through to the most modern designs.

The differences between American pool tables and British pool tables are quite well known, but as a quick reference the following applies:

•    British pool tables are built to a maximum overall size of 7ft where as American designs reach full size at 9ft
•    In general the size of a British pool table refers to the overall length where as an American table is usually described using the length of its play surface.
•    American pool tables have larger pocket sizes than British models, they do however use larger 2 &3/4 inch diameter pool balls compared to just 2” found on their UK counterparts
•    The way the rubber is cut on an American table is different from that of a UK table. American cushions are cut in a wedge shape where as UK cushions are cut in an ‘L’ shape
•    Finally, the cloth used on an American pool table is different from a UK cloth. In short British pool tables use a napped cloth with a high wool content where as American tables use what’s known as a speed cloth with a high nylon content.

The size of an American pool tables tend to make them the centre piece of a room and certainly the cueing room needed around the table means a full size model takes up a considerable amount of space.

There are some famous American pool table brands including Longoni, Brunswick and Sam but surprisingly two out of three of them are actually made in Europe. This gives the UK a unique access point to some best tables in the world.